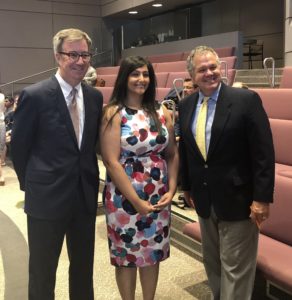 Shortly after joining the Aga Khan Foundation Canada (AKFC) as a volunteer guide, Samia Hirani expanded her volunteerism role to act as the local marketing lead for the AKFC’s World Partnership Walk starting in 2010. The Walk is Canada’s largest annual fundraising movement dedicated to fighting global poverty. Funds raised support development initiatives that allow women and men around the world to lift their communities out of poverty and build a brighter future.

Ms. Hirani also helped establish a Corporate Engagement Team for the Walk, volunteering over 100 hours to organize the team and help it achieve its fundraising targets. At the same time, Ms. Hirani was always available to assist and encourage other team leads in organizing their Walk efforts.

In this year’s Walk, Ms. Hirani raised funds by engaging her own workplace through their youth network and by creating the ‘Public Servants Shattering Poverty’ team, raising over $2,000. Samia Hirani also volunteered with the AKFC’s World Partnership Golf tournament and organized numerous fundraising efforts on behalf of the Walk throughout the year.

The Mayor’s City Builder Award is a civic honour created to recognize an individual, group or organization that has, through outstanding volunteerism or exemplary action, demonstrated an extraordinary commitment to making our city a better place today and for the future. This may include lifelong service, outstanding acts of kindness, inspiring charitable work, community building or other exemplary achievements.

Individuals, groups or organizations may be nominated by members of City Council or the public.