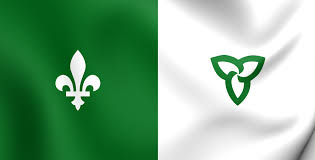 Ottawa – On the occasion of Franco-Ontarian Day, the City of Ottawa, in collaboration with the Association des communautés francophones d’Ottawa (ACFO Ottawa), invites residents to a celebration in the honour of Franco-Ontarians at Ottawa City Hall. A special flag-raising ceremony will take place at Marion Dewar Plaza at City Hall (Fourth flag pole or in Jean Pigott Place in case of rain) on September 25 at noon to celebrate Franco-Ontarian Day. Residents are encouraged to participate and are asked to wear green and white, the colours of the Franco-Ontarian flag.

As part of celebrations marking the 42nd anniversary of its creation in 1975, the Franco-Ontarian Flag will also fly in front of the Heritage Building on Elgin Street at 9 a.m.

The flag will fly at 9 a.m. at the following City locations:

The flag will also fly at 9 a.m. at the following headquarters:

Throughout the year, the flag flies proudly on Marion Dewar Plaza at Ottawa City Hall and symbolizes the spirit of a community and a culture with a rich history.

The Franco-Ontarian Day Act, adopted unanimously in 2010 by the Legislative Assembly of Ontario, proclaims September 25 of each year as Franco-Ontarian Day. Every year, this day recognizes the contribution of Ontario’s Francophone community to the cultural, historical, social, economic and political life of the province.

This Monday, September 25, will mark the 42nd anniversary of the Franco-Ontarian Flag. The flag was created in 1975 by Gaétan Gervais and Michel Dupuis and was officially recognized by the Province in the Franco‑Ontarian Emblem Act of 2001.