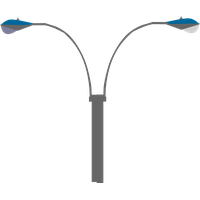 The City is working on the conversion in partnership with Envari (formerly known as Energy Ottawa) who will continue to help to convert the remaining street lights to LED technology. As new roads are built in the future, they will also be equipped with LED lighting. Envari is an affiliate of Hydro Ottawa, the City’s power supplier. Envari has the detailed technical knowledge, experience and project management expertise required to assist with the LED conversion project.

LED street lights have lower maintenance costs, offer greater light control, reduce light pollution, and allow staff to more easily monitor problems and even receive automatic notifications in case of failure. Extensive improvements in efficiency, output, and costs of LED over the last few years have made the technology an attractive replacement to existing equipment.

Switching to LED technology is allowing the City to reduce its energy consumption used for streetlighting by more than 60 percent, generating annual savings of approximately $4 million. In addition, the City expects to reduce maintenance costs for street lights by 50 percent, an extra $2 million in savings each year. Conversion of the remaining street lights is expected to be completed in 2020.

“I am thrilled that the City is able to reduce its energy consumption and costs while still providing the best possible lighting infrastructure to residents. The millions that we save each and every year by using LED technology help us reinvest in other core services and keep taxes low.”

“LED lighting focuses light on the roadway, which provides a well lit surface for safe driving and yet reduces light pollution including up light, back light and glare that might affect nearby residents. By focusing the light on the road, we are able to achieve significant energy savings through reduced light consumption.”

“Reducing the energy we consume for streetlighting by more than 60 per cent is no small feat. Replacing obsolete and inefficient high-pressure sodium and metal halide with LED technology is allowing the City to lead by example in reducing climate-damaging greenhouse gas emissions. If residents haven’t already done so, I encourage them to replace their old light bulbs with LED wherever feasible.”

“Envari’s LED streetlighting solution is one of the best long-term investments a municipality can make financially and environmentally. Our engineered design beautifies communities, promotes smart-connected infrastructure, and provides full wireless control of all streetlighting assets including status monitoring, communication and colour temperature. Every resident benefits from an investment like this.”